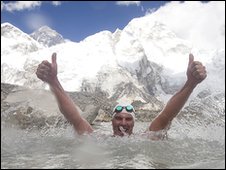 An environmental campaigner has swum 1km (0.62 miles) across a glacial lake on Mount Everest to highlight the impact of global warming.

He said he hoped to bring the “world’s attention” to the melting of glaciers and its effect on the region.

Mr Pugh has been nicknamed the “human polar bear” for his cold water swims.

He completed the swim near the Khumbu Glacier in 22 minutes and 51 seconds.

It is the first time a long distance swim has been completed under the summit of Everest, his campaign team said.

He  has previously swum in Antarctica and across the North Pole to draw attention to melting sea ice.

On his latest trip, the lawyer battled altitude sickness as well as freezing conditions.

He said: “It’s one of the hardest swims I’ve ever undertaken. When I swam in Antarctica and across the North Pole I swam with speed and aggression but on Mount Everest you can’t use the same tactics. Because of the altitude you need to swim very slowly and deliberately.

“Swimming 20 metres at full speed in the test swim, I felt I was going to drown. I was gasping for air and if I had swum any faster I would have gone under.

“I was deeply concerned that I wouldn’t make 1km and I’m delighted that I’ve finally achieved it.”

Mr Pugh said he had had to find a “delicate balance” between going too fast and too slowly, which could cause him to get hypothermia.

He trained on Dartmouth, where he grew up, for the challenge.

He urged governments to make tackling climate change a priority and said he was disappointed the issue did not feature more prominently in the UK election.

The campaigner said he had seen glaciers around the world and many were “melting away”.

“The glaciers in the Himalayas are not just ice. They are a lifeline – they provide water to approximately two billion people,” he added.